The Ambassador-class was a type of Federation heavy cruiser in service to Starfleet in the early 24th century into the 25th century.

The Ambassador-class was designed to be a replacement for the aging fleet of Excelsior class and Constellation class vessels which had been in service for over three decades, and to create a true front-line heavy cruiser. Between 2325 and 2360, the Ambassador-class heavy cruisers were the primary capital ships of Starfleet until 2372, when Starfleet stopped production of these ships.

The prototype of the class, the USS Ambassador, was launched in the early 2320s, and several other vessels were in service by 2324, including the USS Gandhi.

One of the most famous ships of the class was the USS Enterprise-C, the fourth starship to bear the name, which was launched in 2332 under the command of Captain Rachel Garrett. The Enterprise was destroyed in 2344 while responding to a distress call from a Klingon outpost on Narendra III. Upon arrival at the outpost they discovered that it was under attack by several Romulan warbirds. Regardless of the odds, the Enterprise put up a valiant fight and its act of sacrifice kick-started the peace process between the Federation and the Klingon Empire.

Although the Ambassador-class was five decades old by the 2370s, many ships of the class continued to be in service, albeit refitted with the latest technologies which could be found aboard the more up-to-date models such as the Galaxy class explorers.

In 2370, Starfleet commissioned the Bajorans to build a new Ambassador class ship named USS Hannibal at the Okana Shipyards on Bajor. At first Okana Shipyard director Amkot Groell thought the Federation had given the Bajorans a cast-off design, but quickly came to realize that despite the age of the class the Ambassador class design was still very good and quite modern.

In the early 25th century, the Ambassador-class heavy cruiser was available in three variants: support cruiser, retrofit and fleet retrofit. Differences among the subclasses were equipment, hull durability and power levels. Basic Ambassadors were cruisers commanded by officers with the rank of commander or higher. Retrofits were available to Starfleet officers with the rank of admiral. The fleet variant required support by a Federation fleet to be obtained. The fleet retrofit included the Yamaguchi-subclass. The components saucer, hull, neck, pylons and nacelles were interchangeable between Ambassador- and Yamaguchi-class starships.

By 2409, a total of seven basic livery designs was available to choose from, which could be modified further. These options were known as: Types 1-5, and Fleet and Veteran.

In addition, the installation of shields from specific factions modified the hull appearance, including shields from the Reman Resistance] the Breen Confederacy and the Dominion.

The Ambassador-class featured the saucer section-engineering section-warp nacelle layout common to most Starfleet vessels. It was intermediate in size between the Excelsior class and the Galaxy class. In addition, the class boasted at least three engineering levels.

A number of Ambassador-class ships were constructed with minor alterations from the original design. The saucer section's connection to the engineering hull was shifted slightly aft, with the nacelle pylon assembly moved a corresponding distance in the same direction. Cowlings were added around the Bussard collectors, making them appear closer to that of the Galaxy-class, while the impulse engine exhaust changed from a blue to a red glow. The lower sensor dome became more elaborate and closer in appearance to the Excelsior-class and the deflector dish was modified. Finally, the width of the shuttlebay was increased and a second facility resembling that on the Excelsior-class engineering hull was mounted directly underneath the original one. Graphics were upgraded with the Starfleet insignia of the 2360s.

Families were allowed aboard Ambassador-class ships, but only if they were related to a Starfleet crewmember who had served on the ship exceeding six months.

The Ambassador-class was armed with both phaser banks and photon torpedoes with coverage to both fore and aft firing arcs.

A phaser emitter was also located on the secondary hull in proximity of the deflector dish.

According to Natasha Yar, during the 2340s, the Ambassador-class had "a lot more maneuverability than the Romulan counterparts of that era." Yar went on to explain that in her alternate timeline, deflector shield technology of the 2360s would advance considerably during the war, allowing the Galaxy-class to possess a heat-dissipation rate that was almost double those of the Ambassador-class, allowing the Galaxy to hang in a firefight longer.

Primary operational control of the Ambassador-class starship was provided by the main bridge. Located on top of the primary hull, the bridge directly supervised all primary mission operations and coordinated all departmental activities.

In 2344, the central area of the bridge provided seating for the captain only. Directly fore and to the right of the captain was the ops station, with the helm station to the left. The consoles were similar to that used on the bridges of Excelsior- and Galaxy-class starships. At the very front of the bridge was a large viewscreen, with a freestanding console located directly below. Against the back walls of the bridge were consoles for the tactical, engineering, andscience positions. Additional displays flanked the aft consoles. The bridge was accessed through two doors, located on the forward halves of the port and starboard walls. 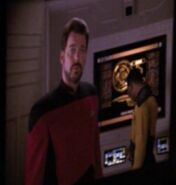 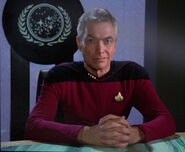 By the 2360s, the Ambassador-class bridge was upgraded to include the standard LCARS interface and consoles typically found on board modern vessels of that era.