Gracie Hart is a female Human Starfleet officer who is a Starfleet Intelligence Agent who is forced to go undercover at the worst possible place. A beauty pagent, to stop a criminal from causing a disater. She hates all things girly and thinks that girls in beauty pagents are just brainless airheads that have nothing better to do in their lives.

Gracie was a very tough kid and most likely wanted to become a Starfleet officer or an SI agent. She was not afraid to stand up to bullies or people older then her. But she was not incapable of feelings because she stopped the boy she liked from getting bullied but ended up braking his nose too.

In 2385, Shepard was replaced as Director of Starfleet Intelligence by Vice Admiral Marta Batanides. 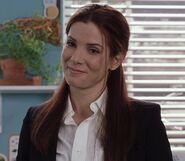 Gracie Hart in 2386
Community content is available under CC-BY-SA unless otherwise noted.
Advertisement