Deflector shields
Auxiliary craft:
2 work bees;
4 Federation shuttlecraft (type-6, type-8, type-9);
1 aeroshuttle
The Intrepid class was a 24th century Federation starship class, a cruiser and science vessel in Starfleet service from the 2370s decade. At the time of its introduction, it was Starfleet's fastest and most maneuverable ship, and the only capital ship able to safely navigate the Badlands. (VOY episode & novelizations: Caretaker, Relativity)

This class shared its name with the Intrepid-class light cruiser launched by United Earth Starfleet in the 22nd century, which continued service in the UESPA branch of the newly formed Federation Starfleet in 2161. (ENT - Rise of the Federation novel: A Choice of Futures)

The first two ships to be constructed, Intrepid and Voyager, were launched from the Utopia Planitia Fleet Yards at the end of 2370 and the beginning of 2371 (stardate 48038) respectively. (ST reference: Starship Spotter)

By late 2377, there were dozens of Intrepid-class starships in operation, and many were involved in operations against the Borg in that year. Ships of this class also saw action in the events surrounding the inauguration of the Unity One starbase in 2378. (ST video game: Armada II, ST video game: Starfleet Command III)

The Intrepid-class was introduced in the early 2370s decade and was Starfleet's answer to their growing need for a versatile and quick class of starships which were capable of excellent maneuvering at both impulse and warp speed. With their variable geometry warp nacelles, the Intrepids had a greater control of their warp field, with the added bonus of not damaging the subspace layer. (TNG video game: Armada II manual)

As well as being designed to be quick and maneuverable in combat, the Intrepids were primarily designed to perform exploration, survey, and courier missions. The Intrepid's advanced sensors made them an excellent exploratory vessel. (ST reference: Starship Spotter)

The Intrepid-class was also one of the first Federation starship classes to be equipped to make a routine planet fall and be able to take off again with ease. (ST reference: Starship Spotter; VOY episodes: "The 37's", "Tattoo", "Basics")

The Intrepids were also equipped with some of the most advanced computer systems of the time, with bio-neural circuitry replacing most of the isolinear circuitry that had been prevalent on previous starship classes. The bio-neural circuitry sped up the computer's data functions and improved overall performance. (VOY episode: "Caretaker"; ST reference: Starship Spotter)

Following the return of USS Voyager from a seven-year odyssey through the galaxy's Delta Quadrant in December 2377, the futuristic technology the ship had brought back, like the ablative armor generator and transphasic torpedos, were classified, and studied under Project Full Circle. (VOY novels: Homecoming, The Farther Shore, Full Circle)

The breakthrough in understanding the quantum slipstream drive recovered by Voyager from Species 116, while hampered by a scarcity of benamite, allowed the installation of the QSD into select starships. Voyager and a fleet of ships were refitted with QSD. (VOY novels: Full Circle, Unworthy)

An additional modification enabled the Intrepid-class ship to perform saucer separations, including during emergencies and at warp speed. (VOY novel: The Eternal Tide)

As a result of the Voyager journey, this class was considered highly successful. By the 2400s decade, the Intrepid class was kept in service and had also spawned several subclasses of long-range science vessels. This included the larger Pathfinder-class starship in 2410. (STO Issue 07: "USS Pathfinder")

In that year, Voyager was a leading ship during the Khitomer Alliance's Operation Delta Rising. (STO - The Delta Quadrant missions: "Mindscape", "Dust to Dust")

Ships of the class were active in the 31st century. By the 3060s decade, the Temporal Wars were over. In 3069, ships of this class were destroyed in the Burn. (DSC episode: "People of Earth")

At least one ship of this type remained in service by the 3180s. Around that time, the USS Voyager-J operated from inside the distortion field hiding the location of the Federation Headquarters. Unlike the launch configuration of the Intrepid-class, this refit did away with nacelle pylons altogether and had detached nacelles. The ship's "J" suffix on the registry number caught the attention of the time-displaced USS Discovery crew when they arrived at Federation HQ in the year 3189. (DSC episode: "Die Trying")

When this ship type was acquired by the Khitomer Alliance in 2411, its official designation was Janeway-class command science vessel, thus differentiating this subclass from the baseline Intrepid. (STO website: The Janeway Class Takes Flight)

During the conflicts around the Omega particle and the Undine incursion in 2376 and 2377, portions of the ships' hull would change color to indicate allegiance. When assimilated by the Borg, the hull and warp plasma changed further. (ST video games: Armada, Armada II)

In the 25th century, the design of the Intrepid-class long-range science vessel allowed its commanding officer to choose from different designs of livery, which could be modified further at starbases. These options were numbered Types, Upgrade and Veteran. (STO - Klingon War mission: "Welcome to Earth Spacedock")

Furthermore, the installation of deflector shields from specific factions modified the hull appearance, including shields from the Reman Resistance, the Breen Confederacy and the Dominion. (STO missions: "Coliseum", "Cold Storage", "Boldly They Rode") 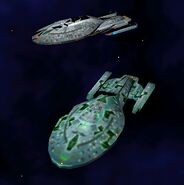 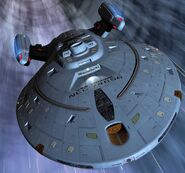 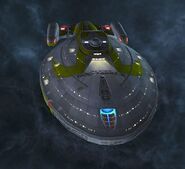 Reman shield, inside a Dyson sphere