The Prometheus-class was a Federation advanced escort starship developed for tactical operations in deep space. The Prometheus-class entered service in the year 2374. Its main feature was the multi-vector assault mode, which allowed a Prometheus-class escort to split into three warp-capable, combat-ready sections Alpha, Beta and Gamma. By the early 25th century, the design had spawned several sub-classes. In a possible future, the Prometheus-class remained in service well into the 26th century.

The Prometheus-class was one of several starship designs, along with the Sovereign and Defiant classes, that were created in response to the Borg threat following the USS Enterprise-D's encounter with a Borg Cube in System J-25 in 2365. Starfleet Tactical's task was to design a vessel that could be fast, maneuverable, and be equipped with the latest weaponry that was being designed to fight the Borg.

However, none of the new designs or weapons were ready for the Borg attack in 2366 which resulted in the destruction of 39 starships and the loss of 11,000 lives. This created a new sense of urgency in getting better equipped starships up and running in the fleet. While the Sovereign and Defiant classes entered service in around 2371, the launch and testing of the USS Prometheus was put back until 2374.

The initial trials of the Prometheus went well, until she was hijacked by a group of Romulans keen on taking the Prometheus to the Tal Shiar so they could learn the latest starship secrets. While the crew were killed by the Romulans, they were prevented in keeping the Prometheus by the starship's Emergency Medical Hologram and The Doctor from the USS Voyager.

After the safe return of the Prometheus and the testing of the ships multi-vector assault mode were completed, Starfleet rushed the construction of two further vessels, the USS Cerberus and USS Heracles. The USS Endeavour entered service in 2378. Both of these vessels were in service by late 2375, and the Cerberus served as Admiral William Ross's flagship from 2376 to 2379.

The Prometheus-class was still in service in 2409, and by that time had inspired two variant classes: Phoenix-class and Cerberus-class, some of these ships were fitted with 4 pulse phaser cannons.

The Prometheus-class was a classified advanced tactical cruiser. It was a revolutionary design that had the ability to confront the enemy from multiple, warp capable vectors for a formidable surprise attack. One innovation that was incorporated into the design was the installation of holo emitters that were outfitted throughout the ship. This allows the EMH Mark II doctor to project itself holographically across the ship allowing it to tend to the crew without it being restricted to sickbay.

By the early 25th century, the Starfleet Corps of Engineers had developed sister classes to the Prometheus. These classes and the Prometheus were collectively categorized as advanced escort, with several refit and retrofit options. Furthermore, all advanced escorts were modular, and their components were interchangeable between these classes. In addition to the active Prometheus-, Phoenix- and Cerberus-classes, Starfleet introduced the Hephaestus-class in 2409.

In the 25th century, the design of the Prometheus-class advanced escort allowed its commanding officer to choose from different designs of livery, which could be modified further at starbases. These options were designated Type 1-5 and Veteran.

Furthermore, the installation of deflector shields from specific factions modified the hull appearance, including shields from the Reman Resistance, the Breen Confederacy and the Dominion.

The warp drive of the Prometheus-class made the ships of this class faster than any other starship in the fleet at the time in the mid 2370s. The warp drive was capable of maintaining speeds exceeding warp 9.9.

The Prometheus-class was designed with an unprecedented level of automation, and, combined with its advanced tactical systems, was one of the most powerful combat ships in the Alpha Quadrant. The primary battle systems on board the Prometheus included regenerative shielding, ablative hull armor, as well as phasers, photon torpedoes and possibly quantum torpedoes. 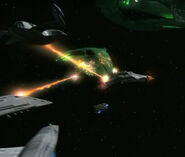 In addition to standard automation systems, the Prometheus-class design also featured holoemitters on every deck, which allowed the ship's Emergency Medical Hologram Mark II to access all areas of the ship (most EMHs were confined to sickbay only).

Primary controls for the ventilation system were located in Jefferies tube 17, which was located five decks up from sickbay.

The fact that the Prometheus class was mainly designed for combat was reflected in the design of its bridge. The bridge was obviously designed with efficiency in mind, providing the commanding officer with visual access to all major stations when seated in the command chair. Directly in front of the captain's chair, sunken down with three steps, was the location of the conn station on the port side and another station to starboard, combined in one large console. The latter was used to activate multi-vector assault mode and assess the status of ship systems, among other tasks. Both officers shared an unobstructed view of the main viewscreen with the commanding officer. All other stations were mounted against the wall, running around the entire length of the room. Directly aft of the captain's chair was the master systems display, with ops and tactical stations to starboard and port, respectively. To the captain's left and right, beyond these stations, were doors that may have provided access to the turbolift system. Further forward still, on either side of the main view screen, were two more stations, which also faced away from the center of the bridge. The starboard one displayed the same graphics as a typical engineering station of the era and provided an alarm when a warp core breach was imminent. Such an accident could quickly be prevented using this station as well.