Trying to think of one I'm guessing the Intrepid picks up a distress call from a cargo vessel, but its a trap set by the Der'kal to destroy the ship but then as the Intrepid approaches the cargo vessel it gets trapped in the disturbance its kinda like TNG Episode Disaster.

Hello, i am Typhuss999 or TyphussJediVader, my old user name, founder of the Memory Delta wiki. I like Star Wars, Star Trek, Stargate Atlantis, Stargate SG-1 and Stargate Universe and Sanctuary, snice season 3 episode "Normandy" and watched season 4 until it ended on December 30th, 2011 with the airing of Sanctuary For None part II. I watched the Lifetime movie Taken Back: Finding Haley staring Amanda Tapping, Moira Kelly, and Kacey Rohl on August 11th 2012 on Lifetime, channel 835 at 8:00pm. I have seen the movie a number of times and liked it.

My friends on this wiki: 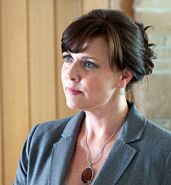 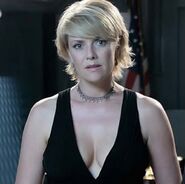 Samantha Carter from an alternate reality.

Helen Magnus from an alternate reality.

Lois Lane of the mirror universe

Destiny, shortly after being launched.

The USS George Hammond in 2387

The Hammond over Earth 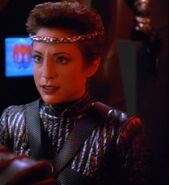 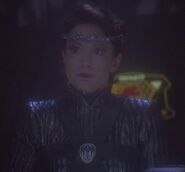 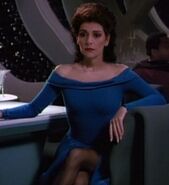 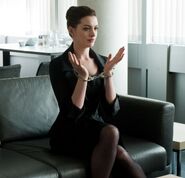 George S. Hammond
Add a photo to this gallery

Serving with you has been an honor."

"The honor was mine... captain." infinite

Ro Laren page The Federation and the Xindi-Suliban Alliance went to war in 2379. By 2383, the Federation lost the war to the Xindi. Ro Laren joined the Alliance and became Intendant of Bajor under the Xindi. As the Alliance grew, new slaves arrived on Bajor, Terran slaves, Bajoran slaves, Andorian slaves, Vulcan slaves and Romulan slaves who were forced to work under the Xindi. Ore processing moved off-world to the orbiting facility of Terok Nor. Intendant Ro Laren is the unquestioned ruler of Bajor and the Bajoran system and she rules from her office on Terok Nor T'leesa Neras

A dog collar was then fastened around her neck

This ship was equipped with a plasma torpedo cannon. [Into a Shattered Place, Part I] Her maximum speed is Warp nine. The forward module holds the plasma torpedo cannon and can be ejected. After ejection, the shipï¿½s maximum speed is warp nine-point-four. [Into a Shattered Place, Part II] The New Regency controlled an Alliance network used during an attack on the Terran Resistance. In 2378, Kira had succeeded Worf as Regent. She led the Alliance attack on Terok Nor. Alliance Network A group of Alliance satellites. They emitted four Tachyon beams and were self replicating. The computing power of a single unit was two point five kiloquads. New Regency controlled by network by interspace signal.

Magnus is bold and straightforward, brave and no-nonsense, yet she remains proudly true to her formal Victorian English sensibilities.

Magnus' past is long and colorful, as one would expect from a life lasting 274 years. However, she proves that living forever is not the best of things and finds it hard at times. She has had to bury countless friends, colleagues, and lovers, making her somewhat reluctant to let new people into her heart. She speaks a vast number of languages, including Italian, Zulu, Japanese, Cambodian, Norwegian, French, and Spanish. Helen is fluent in Latin, being that she is a medical doctor/scientist and it's her father's favorite language. Magnus is also able to understand Arabic, Hindi (has knowledge of its ancient Urdu dialect), as well as German and can identify its Bavarian dialect(s). She is also good at reading and translating other ancient and rare languages, such as Cuneiform, Sanguine vampiris script, and Praxian lexicon. On more than one occasion she is shown to be skilled in hand-to-hand combat.

Magnus is abundantly seen to be very comfortable in holding and being adept at using a wide variety of weaponry, including but not limited to: pistols (revolvers and semi-automatics), rifle(s), an rpg launcher, knives (fixed blade, diving, folding, switchblade, and butterfly; includes being quite deft with a scalpel), a multitude of improvised melee weapons (spear, staff, chain, batons, and hammer; less efficient with a rock and a broken off metal bar), tranquilizer guns (semi-autos firing tranq bullets; an airsoft rifle firing tranq darts), two types of Praxian energy weapons ("whip" and "vaporizer"), and all sorts of tech gizmos that Henry whips up in his weapons lab. She was able to create a bomb/explosion out of lit stores of jet fuel, and even used the automated assist mechanism to kill intruders. With a brief glance, Magnus can specify weapons, such as Starstreak missiles.

Helen possesses is the ability to operate almost any type of vehicle; she is able to drive cars/vans/SUV(s) and motorcycle(s), pilot planes and helicopters, and can even fully command a tank (pilot and fire).

She is technologically savvy, being able to use and repair a range of analogue and digital devices, is familiar with the Sanctuary's computer system, and can perform piggy-backed hacks. She can get severely damaged and parted computer systems to operate again powered with car batteries, as well as able to boost a crashed helicopter's radio distress signal using the inside walls of the borehole of an abandoned oil rig, and can send a long-wave transmission out of old disused radios attached to solar panels. She can also quickly figure out the UI of both Praxian and Vampire technologies.

One of Helen's most impressive talents is the ability to recreate tech devices after only seeing and handling them for a brief period of time: she was able to have Henry recreate the stunner weapon she encountered in the Guardian's alternate timeline. When Helen and Will were trapped in Carentan, she was able to successfully recreate a jerry-rigged version of Adam Worth's time nodes to nullify the time dilation bubble even though she never actually physically spent time working on one of Adam's nodes (Henry and Nikola did; whom the audience can infer relayed their findings to her).

In an implanted perfect dream world, Magnus is an at-home freelance painter who doesn't show her work publicly at art galleries, but instead prefers to sell her work privately to buyers through her agent.

Retrieved from "https://memorydelta.fandom.com/wiki/User:Typhuss999?oldid=167998"
Community content is available under CC-BY-SA unless otherwise noted.

Ranked #1
on this wiki