Vala Mal Doran is a female Human born on Earth in 2333, who was a notorious thief, con artist, interplanetary bounty hunter, mercenary and arms dealer and former Goa'uld host and also a current member of SG-1, the SGC's flagship team, who tried to hijack the Prometheus and sell it for weapons grade naquadah. Her plans were thwarted by Typhuss James Halliwell, who managed to overcome her and recover the ship. She escaped from the ship's brig and disappeared into the vastness of space inside an alien starship in which she had used to entrap the Prometheus crew, but she appeared to have developed affection again for Typhuss during her time alone with him on the ship and later became member and senior member of SG-1 in 2379. Vala was later rescued and brought back to the SGC where after passing a psych evaluation, she became a probationary member of SG-1 before finally becoming a fully-fledged member of SG-1. Vala was a former Goa'uld host to Qetesh.

Vala has a tendency to lie and trick people in an attempt to get her way. This sometimes gets to the point where she assumes it is necessary when it really isn't, such as when she is required to take a psychiatric evaluation and she gives fake answers in an attempt to avoid being tricked. Despite this fact, she has proven herself to be quite courageous and trustworthy in many circumstances, and is now a valued member of the SGC.

As such, Vala continues to be a member of SG-1 to this day.

Much of Vala's early life is unknown. She was raised by her mother for sometime as well as her father Jacek and her stepmother, Adria. In 2353 Vala started to date a man named Typhuss James Halliwell. In 2354, Vala's and Typhuss's daughter Adria is born on January 23rd. At some point in 2361, she was taken as a host to the Goa'uld Qetesh. Vala was freed when a Tok'ra incited a rebellion against the planet's ruling Goa'uld.

The people rose up, captured Qetesh alive, tortured and beat her for days on end, not realizing it was the symbiote that had ruled them so harshly. Taking pity on her, the Tok'ra rescued her, removed the Goa'uld symbiote and nursed Vala back to health. Vala makes a living trading, stealing, and selling things, and though she provides weapons to shadey characters, Vala is something of a morally conscious arms dealer. Vala is brash and self-confident, and disguises her true, sensitive character with humor and innuendo.

During those four years after being freed from Qetesh, Vala began her life as a free agent. All of her activities appeared to have been to satisfy her own selfish needs and desires. She accumulated wealth in all types of material things and enjoyed an exciting life trading on the black market.

After the fall of the Goa'uld, she took advantage of the many riches which flooded the market. Along the way, Vala developed "relationships" with thieves, smugglers, and mercenaries. Many of these smugglers and mercenaries banded together to take advantage of the power vacuum called themselves the Lucian Alliance, and began terrorizing planets inhabited by former slaves.

Vala didn't join the Lucian Alliance, but she often did business with them. Vala apparently enjoyed the life and became very good at it. She used the Goa'uld knowledge left behind by Qetesh to develop a strong understanding of alien technology. She also benefited from the naquadah in her blood by being able to operate Goa'uld technology, such as the healing device and ribbon device, even after she no longer hosted the symbiote. After joining the SGC, Vala beneficially used her unique knowledge and abilities gained as a former host and trader on the black market.

Hijacking of the Prometheus

In 2378, Vala hijacked the Prometheus, which was traveling to Starbase 306, wearing Kull armor. She shot the crew with a Zat'nik'tel and transported them onto an unoccupied alien ship, but kept Typhuss as her prisoner because he was "very attractive", was her former lover and she needed him and Daniel to tell her the ship's codes.

Despite Typhuss's and Daniel's insistence that they didn't know the codes to the ship, she tried to get them to tell her the codes to her, first by shooting them with a Kull weapon and then by attempting to seduce them. After shooting them, Vala healed Typhuss's and Daniel's wound with Goa'uld technology. Eventually, Typhuss and Daniel was able to fight back and regain control of the ship, throwing Vala in the brig. They discover that Vala was taking the ship to sell it to Jup and Tenat, and shortly afterwards they are attacked by a group of ships belonging to the Lucian Alliance, Daniel and Typhuss realizes that they need Vala's help to overcome the assault, so they work together. At this point, the alien ship being commanded by Lieutenant General George S. Hammond and the crew of the Prometheus catches up to them and destroys the enemy ship. Vala is thrown back into the brig, and the crew start bringing the Prometheus back to Earth, abandoning their original mission as the ship was in need of repairs. Vala escapes and transported to the alien ship, which was following close by and overpowered SG-3 and transported them to the Prometheus before fleeing to hyperspace.

In 2378 Vala became a member of SG-1, when the team started to trust Vala, Vala has showed that she can be quite courageous and trustworthy in many circumstances, and is now a valued member of the SGC.

In 2381, she along with SG-1, Typhuss James Kira, and General Jack O'Neill finally tracked down the last Ba'al clone and sent him to the Tok'ra homeworld, where they witnessed the Extraction Ceremony, the Tok'ra felt it only right that all of the current and former members of SG-1 attend the ceremony (O'Neill was a former member of the team who joined the current members, Mitchell, Typhuss, Samantha, Daniel, and Vala). It took a little over three hours for the Tok'ra to chant all of the charges against Ba'al, the last of the Goa'uld System Lords. All during this time, Ba'al was placed in a stasis chamber out of respect to the host. After all of the charges against Ba'al were presented, Ba'al was released from stasis so that he could face his executioners and give his final words. This Ba'al revealed that he might have been the last clone, but he wasn't the last Ba'al. The original still lived and wasn't traceable through a subcutaneous transmitter like the clones had been. The clone was aware of Ba'al's plan to go back in time and change the timeline in his favor by preventing the Stargate Program from ever being created. The clone Ba'al bragged about Ba'al's plan, but didn't provide any details, but only that they had made a mistake in thinking that he was the last Ba'al. This was a rather unpleasant experience for Vala, who had been an unwilling host to Qetesh until the Tok'ra freed her, but she attended for the host's sake so that she could be there to offer emotional support once he was freed of the symbiote. The rest of the team returned to Earth so that they could go out to lunch with O'Neill, who promised to take them out to eat. While changing in civilian attire in the locker room, Daniel voiced the concern to Typhuss and Mitchell that the Ba'al clone might have actually been telling the truth and that they hadn't captured all of the Ba'als as they thought. What Daniel and the others didn't know was that a time traveling version of Cameron Mitchell had been aware of Ba'al's plan and gone back in time to prevent it. That version of Mitchell killed Ba'al and his Jaffa as they went back in time. Because of this act, the last of the Goa'uld System Lords had actually been killed long before SG-1 was even aware of the Goa'uld's existence.

In 2378, Vala was assigned to the USS Intrepid-A as an intelligence officer by Captain Typhuss James Kira. (Star Trek: Intrepid)

In an alternate timeline, the Federation was at war with the Klingon Empire in 2400. In 2403 after the war was over, the Federation Starfleet was destroyed and was replaced by the new Bajoran Starfleet. Vala joined this new Starfleet. By early 2403 Bajor was succumbed to numerous but unsuccessful raids by the Klingon Empire. Bajor had built a large fighter wing division which would defend the planet from the pathetic attempts from the Klingon Empire in attacking the Bajoran homeworld. This timeline cease to exist when Typhuss and his crew won the war against the Xindi. (Star Trek: Intrepid)

During this time, Vala was a motorcyclist and own a red motorcycle. Vala also had snake tattoos on her neck, chest and both of her arms. In 2353 Vala first met Typhuss James Halliwell at a night club. That night Vala fell in love with Typhuss. Vala took Typhuss back to her house and had sex with him. The next day Vala and Typhuss started to date. Their relationship lasted for one year, they found out that they weren't right for each other and Vala broke up with Typhuss. A week later Vala found out that she was pregnant. In 2354 Vala gave birth to her daughter Adria Mal Doran on January 23rd. Vala would later Typhuss about his daughter in 2385. (Star Trek: Intrepid) 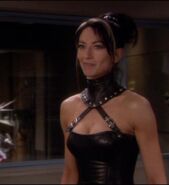