Memory Delta Wiki
Register
Don't have an account?
Sign In
Advertisement
in: Species, Alpha and Beta Quadrant races and cultures

The Xindi (pronounced ZIN-dee) were an alliance of species who evolved on the same planet in the Delphic Expanse, known as Xindus, whose infamous attack on Earth and attempts to terminate Humans in the early 2150s changed the course of history and initiated the series of events that helped establish United Earth as a major interstellar power. In at least one future timeline, from where Daniels originated, the Xindi state had, by the 26th century, become a member of the United Federation of Planets. The Xindi had joined the United Federation of Planets by 2311.

Six different intelligent species developed on Xindus; one of them, the Xindi-Avians, was believed extinct by the 2150s. The surviving species were united under the governance of the Xindi Council, which contained two representatives from each species. Despite mutual distrust and hostility, the five have made every effort to remain united, fearing a second devastating war like the conflict responsible for the loss of their homeworld. However, each of the five remaining species had their own distinct opinion about which was the dominant species, all separately favouring their own one. There was therefore an enormous amount of conflict and distrust between the species.

The different Xindi species were extremely similar in their functionally-important DNA, sharing over 99.5% despite the apparent physical differences. All the Xindi species shared distinctive ridges on their cheekbones and foreheads. The Arboreals are perhaps the most peaceful of the Xindi races, only striking out violently when attacked by others. They are known to be somewhat lethargic, although they grow agitated when around water, which seems to invoke a phobic reaction in most Arboreals. As their name indicates, they prefer to shelter in trees. Of the other four races, they are most closely allied with the Primates, who are also of mammalian stock.

The Aquatics are complicated and enigmatic and have been known to over-analyze, taking an excruciatingly long period of time to come to decisions. Xindi-Aquatic communication is highly complex and, since the Aquatics are underwater beings, they do not use their mouths, instead generating sounds through organs near their gills. When using the past tense, they switch to SONAR. They respond better to visual stimuli, however, and are extremely suspicious of the spoken word. They admire boldness and confidence and treat hushed tones with suspicion.

The Insectoids are the most numerous species, a consequence of their rapid rate of reproduction. They are asexual, and lay eggs. Their average life expectancy is twelve years. The Insectoid language is a clicking dialog that is the most unusual and complex of all Xindi languages. In fact, there are 67 dialects. Insectoids have names that grow longer and more difficult to pronounce as they grow older. They interpret raised voices as a sign of hostility. They are quick to make decisions and are often in alliance with the Reptilians.

The Primates are the Xindi race most closely resembling Humans. They are typically stereotyped as honest and trustworthy by other Xindi, but on balance are often convinced of their intellectual superiority over the other races. Nowhere near as aggressive as Reptilians or Insectoids, they are in fact possibly the most arrogant of the five species. Given their comparatively soft skin, they are not seen as being very resilient. Their engineering know-how is greatly respected, however.

The Reptilians are the most aggressive and militaristic of the Xindi. They are perceived as being untrustworthy and impatient by the other races, but are often called upon to defend all Xindi in times of war. Military rank often determines social status. Despite a history of conflict with the Insectoids, this is the race they most frequently associate with, to the point of sharing spacecraft. Reptilians are cold blooded, and bask under thermal lamps when aboard ships or otherwise cut off from direct solar energy.

The Xindi had a long and turbulent history, characterized by interspecies conflict up until the destruction of their homeworld in the 2030s. In the 2150s, they attempted to destroy Earth with a massive weapon. In the mirror universe, Xindi ships fought in a conflict with the Terran Empire sometime prior to 2155. In the 26th century of an alternate timeline, Xindi served on the USS Enterprise-J during the Battle of Procyon V against the Sphere Builders.

The Xindi practically worshipped the Guardians, considering them saviors. Children were taught to revere them and give thanks to them at the end of each day. It was a terrible offense to question a Guardian. Xindi passed down "initiation medals" among the members of a family.

The Primates, Arboreals, and Reptilians spoke a common language that was recognized by Starfleet universal translators. The Insectoids and Aquatics understood this language, but appeared to be physically incapable of speaking it. 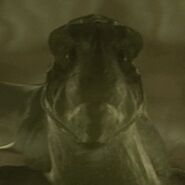 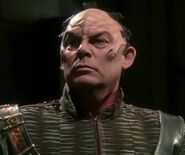 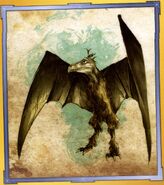 The only known picture of a Xindi-Avian

The skull of a Xindi-Avian
Community content is available under CC-BY-SA unless otherwise noted.
Advertisement